In honor of John Cage the Forum of Contemporary Music Leipzig [FZML] makes his unique music to be played on over 1.000 bells all around the world.

LEIPZIG: The worldwide Carillon Project starts on May 4th 2013 with performances in the United States of America and Lithuania. With this project the one-year-lasting, international art and music festival CAGE100 by the FZML goes in its next round.

Between May and August John Cage's rarely played compositions for carillon, »Music for Carillon No. 1 - 5«, can be heard in more than 40 performances worldwide. A carillon is a set of tuned big bells usually mounted in towers of churches or municipal buildings. This instrument, which spread over Europe since the 17th century and accompanied important events of public life with music ever since, now encounters one of the most innovative and exceptional composers of the 20st century in a concentrated and yet diverse form. Most of the carilloneurs involved came across the oeuvre of John Cage for the first time. Therefore this music is unfamiliar and new for the musicians as well as for the audience and the specific places where they are played. Altogether more than 1.000 bells will send out John Cage's compositions to the town squares and beyond.

An overall view of the project including concert-streams, comprehensive information about the performances, places, musicians and the specific instruments in the participating cities can be found here: http://www.cage100.com/english/projects/carillon-project/

Despite its exceptional and wonderful sound the carillon is an instrument barely perceived by the gen- eral public. Carillons are usually found in the towers of churches, town halls or university buildings. The biggest bell can have a weight up to 18,5 tons. The special exposed position of the instrument allows the music to be heard not just on the town square but all over the city.

The works were created between 1952 and 1967. Because the decay time of carillon sounds can't be manipulated by the nature of the instrument which means that the sounds fade away automatically, Cage wrote all tones in the carillon pieces in whole notes. »Music for Carillon No. 3« is the retrograde inversion of the piece »Music for Carillon No. 2«. Both pieces are dedicated to the pianist David Tu- dor. »Music for Carillon No. 4« is the only work of the series which uses live-electronics. Cage created this piece by putting a transparent score template over a star atlas and marking the stars as notes on the lines of the staff. For »Music for Carillon No. 5« he drew a system of staff lines on five woodblocks. The intersection of the wood grain or core with the staff lines shall be interpreted as the notes and provides the rhythmic structure.

The carillon project is part of the art and music festival CAGE100. Since the opening on July 6th 2012 various events and concert series took place. To these belong, among others, the exhibition »Opening Spaces for Action« in the Museum of Contemporary Art Leipzig, the chamber music series »No Purpose. Sounds«, the new-years-eve orchestra concert »Happy New Ears« as well as the international piano concert series »Water Music Project«. 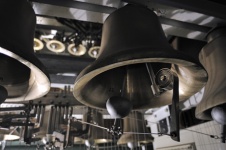 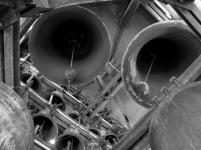 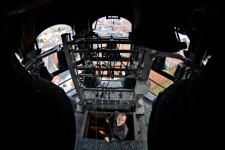